Taking the quadcopter a stage further

With the race on to find UAVs with the ability to deliver packages for both courier and shopping services like DHL and Amazon, efficiently and effectively, the clever Belgians have come up with a crossover drone utilising the speed of fixed wing aircraft and maneuverability of quadcopters. 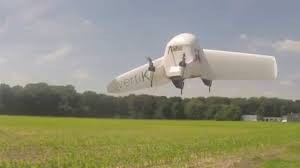 Researchers in Belgium have devised a prototype delivery drone which they say could rival the likes of Amazon Prime Air and Google’s Project Wing.

The University of Leuven team behind VertiKUL 2 (KUL is the acronym for Katholieke Universiteit Leuven) say the drone combines the ability of quadcopters to take-off and land vertically with both the speed of conventional aircraft and their capacity to fly long distances.

It’s the first snow of the year here in the Surrey Hills.

So, here we have the BBC striking ‘drone fear’ into the hearts of ordinary folk again.

The report is based on a paper prepared by Open Briefing regarding the use of UAVs by terrorist organisations to carry out offensive missions against British targets.

As noted from  the report, they have picked out a list of commercially available UAVs which could possibly carry a payload of enough size to cause damage and loss of life to mobile and static targets. These include the DJI Phantom 3 with a whopping payload of 300 grams.

Targets could be such things as a G8 summit or the Prime Ministers car. The Phantom 3 barely achieves the 35mph they have stated, providing there is no wind, rain, fog, so, with a flying time of 28 minutes (Hmm, I only get 18 minutes on a good day out of mine), do you think they could catch his car? Don’t you think there are specific anti terrorist measures at the G8 summit? Jamming, they can already do this. And with it’s huge payload is it just going to go ‘pop’?

Examples given for the ultra scary ‘Lone Wolf’ scenario are that an employee of the US National Geospatial-Intelligence Agency accidentally crashed his friends DJI Phantom into the White House lawn in 2015. Well, he probably had a pass anyway, but it is scary right?

There’s a bit of conjecture with lots of ‘reportedly’, ‘Some reports estimate’, ‘some allegedly’, and so on and so forth. Probably written by a 20 year old for his university course work. Or by someone backing technology firms involved with the immense defence and weapons industries.

It really is a bit much. We seem to try and spread fear and panic for reasons not known. Yes, you could use a UAV in a bad way. Like a Reaper? Well, that is closely guarded tech, but we are talking big UAVs, way beyond the mass market drones the public think about when you mention the word.

So don’t panic yet. Your just as likely to find a terrorist using a car, luggage or some other horrific method to carry out their terrible plan. You can read more from this ludicrous report from the link at the bottom of the page.

In reality, for that is where we live, you are more likely to find a youth flying his drone trying to take pictures of the queen in bed with her Sunday papers and morning cuppa!

Warning over drones use by terrorists

The authors suggest manufacturers should program drones with the GPS coordinates of no-fly zones.

The British government should also relax regulations on radio frequency jammers, they add.

Currently in the UK, anyone can own and operate for non-commercial purposes a drone that weighs less than 20kg (3st 2lb) – and there are hundreds on the market.

“A range of terrorist, insurgent, criminal, corporate and activist threat groups have already demonstrated the ability to use civilian drones for attacks and intelligence gathering,” the report reads.

So are Intel going to go head to head with Google?

Intel is to acquire a German drone company, increasing its investments in drones, which the company recognises as “an important computing platform of the future”.

Its acquisition of Ascending Technologies, a maker ofprofessional/civil and research-oriented drone lines, follows investments in three other drone companies.

Everyone appears to be joining the UAV industry as we push the boundaries of possibility.

So, now you can win cash fopr designing the software to communicate between Ford’s vehicles and UAVs. If you want to learn more:

Las Vegas, Jan. 5, 2016 – Ford and DJI are imagining a world in which vehicles and drones become more capable and efficient working together, and are announcing a challenge to develop the software to make that possible.