Increasing popularity in drone use could lead to dangers

By Kaitlyn Naples
By Jason Frazer 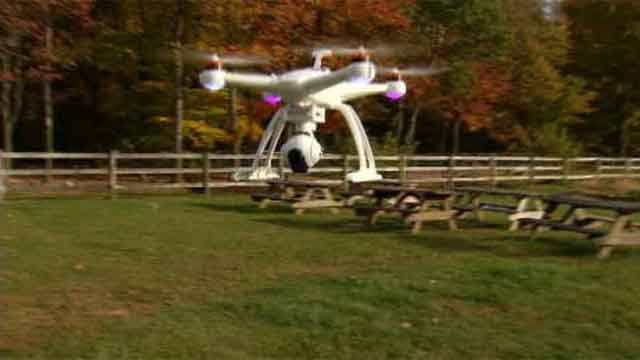 HARTFORD, CT (WFSB) –Drones are popping up everywhere, and as the holidays are approaching, shoppers may be considering picking one up for a gift.

However, as their popularity grows, pilots in Connecticut are worried about the dangers they could pose to others.

Erick Royer said he doesn’t mind letting his son periodically take control of one of his drones.

“It’s a great family activity,” he said. “I really like them because I like the ability to have an eye in the sky, being able to take high definition photographs in the sky.”

By Christmas, the Federal Aviation Administration said it estimates there could be more than one million drones in the sky. Part of the reason is how cheap they are. They can be bought at Walmart.com for under $50.

“The technology has made it so that they’re super easy to fly,” Royer said.

The Consumer Electronics Association has called 2015 the “defining year for drones.”

Sales of drones are up 63 percent over last year.

However, pilots like Dr. Michael Teiger said the popularity of drones is worrisome.

According to the FAA, more and more pilots are reporting seeing drones in the sky. Just this year alone, there have been seven reports of drone sightings.

“There’s no way to avoid something that’s up there,” Teiger said.

In June, a pilot flying near Groton told the FAA and Connecticut State Police that he was forced to take a sharp left turn after seeing a drone near his plane.

Police were unable to find the object.

It is obvious that if the drone industry sell a huge amount of UAVs this Christmas that we could have problem with airspace and novice flyers having accidents. What is the answer? More regulation? I don’t think so, education is the key, which starts with the manufacturer.

Perhaps, before buying a UAV, a simulator should be used to help train the novice before they proceed to the outside world. However, this would leave it to the industry to self-regulate.