So, after looking at the market place and viewing various UAVs on offer, the DJI Phantom 3 Professional looked like it would tick all the boxes. 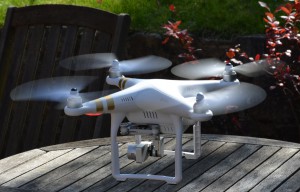 What was I looking for? Simply, I was going to invest in a UAV that would be well equipped for a reasonable price, safe, with integrated camera and that I could use for commercial purposes. Considering DJI hold a market share of approximately 80% it seemed logical to investigate their offerings.

When it arrived it was very exciting. Instead of the standard hard case, this one came with a Manfrotto backpack. It also came with 3 batteries and 2 chargers, spare rotor blades, spare skids, 64GB micro SD card and tool pack.

All the parts have a quality feel to them as you first unwrap them. The smart batteries really make a difference, with indicators to tell how charged they are and being ‘smart’ they can tell you how ‘well’ they are. This was really important to me as I had a Phantom FC40 prior to this and it can be really difficult to tell how good the batteries are, indeed two of these batteries nearly exploded.

The camera, which, after all, is the part which needs to perform well, is held under the main body using a 3 axis gimbal for stability. The camera has a Sony EXMOR sensor giving 12.4 MP still shots and up to 4K video including UHD, FHD and HD quality video. F stop is f/2.8  with a field of view of 90°. Does it take quality pictures though?

The following photograph was taken in a constant 14 knot wind on the south coast and, although this has been reduced in size, you can see the quality and detail this little camera picks up:

Vivid colours with a depth of photo I was not expecting. No, it’s not a Panasonic GH4 or Sony A7, but then it’s not meant to be. Stepping up from a GoPro Hero3 which I had on the FC40, it is a revelation.

This video of heathland shows the clarity with which the Phantom picks up nuances in colour and depth. As with many things, this is a compromise. If you want to take aerial photographs and video and you just want everything to work out of the box, then this should be high on your shopping list.

The camera works, what about the flying?

The whole system comprises three parts. The UAV itself with it’s integrated camera. The ground station to control the craft. And your tablet or smartphone device. Should your device be Android or iOS? More on this later.

Through the DJI GO APP, we can change settings such as ‘learner’ mode, maximum height, maximum distance from you and a plethora of other settings which we will not go into just now.

Flying is incredibly simple. The ground station is intuitive to use, with buttons for taking a picture, taking a video, adjusting the camera angle up or down, changing camera exposure, changing flight modes, emergency return to home and, of course, controlling the craft in flight.

In GPS mode the UAV tends to try and compensate for flying movement, ie it’s motors work harder trying to straighten the aircraft out while you fly about all over the place. It is safer because the aircraft always knows where it is, but videos can be affected by the slightly erratic movement created. However, for positioning into the right spot for a particular shot or just hovering and capturing, it is perfectly acceptable.

Capturing smooth video is the art though. The best way to do this? Fly in ATTI mode. So what does that mean? In GPS mode, when you let go of the control sticks the aircraft stabilises and hovers in that position until you move it or press the home button. In ATTI mode, when you let go of the sticks it stabilises but will drift with any wind there is.

Flying the DJI Phantom 3 is excellent. Highly manoeuvrable, and very easy to control, reasonably fast with a top speed of 16m/s and vertical lift of 5m/s. A battery will last 20 minutes, give or take, and the app will tell you when it is critically low, returning or landing the Phantom as soon as it gets below a pre-set battery level (defaulted to 35%), which is a great help if you forget yourself while flying!

It is good to see DJI are finally realising that as well as investing in the actual product, they have to improve their software. With the latest updates they have incorporated features such as Way points and Follow me (you will find the menu for these to the left of the aircraft status display at the top of the screen in ATTI mode). However, for the unwary, here are a few cautionary notes to look out for.

I fly using an iPad Air 2 with Wi-Fi. The ‘Follow me’ function is not available with this. I cannot say if it works with other iPads, but you will probably need a cellular version for it to work. I would have tried this function with my Samsung S5, but I lost complete faith with this phone because while flying previously with it, it decided to ‘disconnect itself and would not reconnect. The Phantom was 300 metres away at the time in ATTI mode. I’m not sure what it was trying to do but I had to rip the USB cable out and take manual control. The Samsung is soon to be on eBay! I did manage to control the Phantom blind and hitting the Home button did recover the situation. Always remember your emergency procedures, thanks Sion.

So moving back to iPad control, I checked out Way Points. This is a good feature and easy to use. Just hover over a point, click record, move to another place, click record, and you have two way points set in the system. You can now fly between the two. There are many uses for this and you can set loads of way points. They can be at different heights, different areas, as you like! I had decided to send the Phantom from one end of the garden to the other, simple. After setting the first point, I followed it across the garden and decided to move a little further down the garden to set the second point.

I was going to film the Phantom coming towards me from the other side of the garden…….

So beware when setting waypoints. Remember your spacial awareness! And, if you have set waypoints, and you use that same route at another time (it saves the last few routes you set) beware as heat and air density may have an adverse effect. I tried this in the midday sun, and then ran the same route at dusk when the temperature had dropped 10 degrees. The Phantom hit the deck, hard.

For the Phantom 3 Professional to come out of this review intact is remarkable in itself, but how did it fair against our check list.

Yes, we really like this little UAV, it packs a huge punch into a small package. For bang to buck ratio we give the Phantom 3 Professional a wapping 9/10.

* =We only gave this an 8 because when we first flew the Phantom, Waypoints, Follow Me and hover round a point were not available. So it is good to see DJI investing in this part of the process.