It fell to a ledge on the 36th floor and he asked security guards if he could have his drone back.  They said they would help but called the police who promptly arrested him shortly after 8pm on Thursday night. 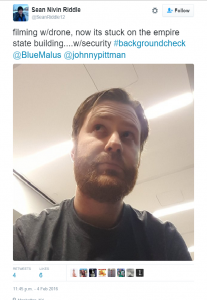 Okay, so don’t fly in downtown Manhattan near the Empire State Building unless you know what you are doing. Apart from anything else, if it hit you from the 40th floor it would cause some severe damage! And then – don’t tweet about it!

Anyway, the dangers of flying near tall buildings with a small drone are that the building creates it’s own wind vortex. As you get closer to the building the air starts to be sucked towards and up the building – and this will draw in a drone. You need to be very careful and totally aware of this possibility when flying near buildings.

281 thoughts on “Man crashes drone into Empire State building and then tweets about it!”